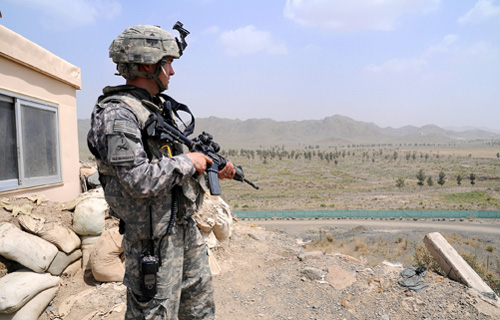 Post-traumatic stress disorder (PTSD) has been recognized and studied for over 100 years. During the two World Wars, soldiers were described as suffering from “shell shock.” The most common approach to help them cope with this issue was to tell them to try and forget their memories of the traumatic events from their war experience and bury their feelings.

With further work in the treatment and study of the disorder, PTSD moved beyond its association with the battlefield and psychiatrist began to recognize PTSD in patients who had suffered from a myriad of traumatic events including “assault, torture, rape, accidents, and man-made and natural disasters, (events) to which the victims responded with helplessness and horror”.1 Depression, nightmares, poor quality of life, sleep disturbances link to the diagnosis of post-traumatic stress disorder (PTSD). Among veterans who served in Operation Iraqi Freedom, sleep disturbances have been the second most common reason for needing mental health services.2 This article explores the latest issues in etiology, diagnosis, and management of the patient suffering from PTSD and sleep disorders.

At a fundamental level, the cause of the disorder is linked to events or circumstances that have been a threat to health and safety, and the patient’s capacity to cope with the symptoms of PTSD are overwhelmed.3 Moreover, the event or circumstance causing PTSD has a distinguishable beginning and end.

The definition and diagnosis of PTSD has broadened through time and the disorder is currently associated with three activities or action for the person experiencing the disorder:

There are several scales and questionnaires that are used to assess the syndrome; several of these evaluate the patient for depression, anxiety, quality of life, and sleep disorders.1

In the affected brain, the hypothalamic-pituitary-adrenal (HPA) axis and the sympatho-adrenal medullary (SAM) axis are altered significantly which effects the central nervous system, causing changes in sleep-wake regulation and the level of consciousness, and effects the cardiovascular and immune system. Stress early in life (including childhood neglect and abuse) may negatively affect an individual’s coping capacity for stress and has been found to be predictive for the development of PTSD later in life.3

Frequently, adults suffering from PTSD complain of sleep disturbances. In a study published in 2006 by Maher et al, between 70% and 91% of adults with PTSD complained of sleep disturbances.4 Another study found that 18.8% of patients with PTSD reported having nightmares compared to a comparison group of non-patients in whom only 4.2% reported nightmares.5 Patients with PTSD have been found to have more stage-one sleep, less slow-wave sleep and more density in Rapid Eye Movement (REM) stages than in patients without PTSD. (REM density refers to the number of REMs during a REM period).

There is also a shorter latency period before moving into REM sleep in patients with PTSD, when compared to normal patients.6 REM sleep for PTSD patients may include other bad dreams that are not associated with the traumatic event, acting-out while dreaming, and sleep-disordered breathing. During non-rapid eye movement (NREM) sleep may include nocturnal panic attacks and sleep terrors.6 Home monitoring has found in comparison to patients in a sleep diagnostic center, patients with PTSD had increased sleep latency and reduced sleep efficiency when sleeping at home versus the center. This finding may be explained in that PTSD patients feel safer when outside their home environment and have conditioned insomnia when at home.3

The PTSD patient who exhibits hypervigilent behavior may have changes in the balance between areas of the brain that are in non-REM sleep (local sleep) while other areas of the brain are awake. This concept of “regional sleep” has been seen in patients who are somnambulating (sleepwalking). (High density EEG may soon be investigating the idea of regional sleep in PTSD.3) However, the polysomnographic characteristics generally associated with PTSD have not been strongly supported in research and there is not yet a unique objective sleep profile for PTSD when compared to other disorders such as depression.6

It has been shown that in adult patients, disruptions in normal sleep patterns (ie REM sleep fragmentation and an increase in nightmares) within a few weeks after a traumatic event are associated with an increased risk for developing PTSD.2,6 Research in pediatric patients has been limited and much has been based on subjective questionnaires rather than more objective measurements but there also seems to be a similar correlation between experiencing a traumatic event leading to nightmares and sleep disturbances and eventual development of PTSD.5-6

Some 70% of patients with PTSD complain of insomnia and nightmares; according to a large epidemiological study of patients who have a complaint of nightmares, 31.8% + 11.9% of them had PTSD. In patients without PTSD, only about 8% complain of nightmares.3 In patients with PTSD who also had sleep-related breathing disorders, such as obstructive sleep apnea (OSA) and upper airway resistance syndrome, treatment with continuous positive airway pressure (CPAP) was shown to improve their complaints of nightmares and other PTSD-related symptoms.7 Other sleep disorders appear in greater frequency in the PTSD population including periodic leg movement disorder (PLMD), sleep walking, and sleep paralysis.3

Treatment of Sleep Disorders in PTSD

Treatment for PTSD has been effective in relieving the three activities or actions mentioned earlier that are associated with the disorder (re-experiencing the traumatic event, avoidance of stimuli and generalized numbness, increased arousal) but sleep issues still persist. Other comorbid conditions that link to PTSD and that tend to affect sleep may need attention including depression; substance abuse such as alcohol, nicotine, stimulants; anxiety and pain; or traumatic brain injury. Cognitive-behavioral therapy (CBT) has been selected as the first-line option for treating PTSD by the Veterans Administration/Department of Defense Clinical Practice Guideline (VA/DoD CPG) and the International Society for Traumatic Stress Studies (ISTSS).2 CBT has the patient focus on their thoughts and emotions to become more aware of those that are destructive or disturbing and uses strategies such as journaling, role-playing, relaxation techniques, and mental distractions to overcome the damaging thoughts and learn how to cope better.7

Another first line therapy recommended by the VA/DoD and ISTSS is found in Eye Movement Desensitization and Reprocessing (EMDR). The desensitization and reprocessing protocol calls on the psychotherapist to move a finger back and forth in front of the patients face and ask that the patient follow this motion with their eyes while at the same time having the patient remember a traumatic event along with the emotions and sensations that accompanied the event. Slowly, the therapist has the patient shift his or her thoughts to more pleasant considerations. One session may last 90 minutes and some research has shown that CBT has had a positive impact on PTSD and sleep issues. This is a controversial therapy and it is not known how it works, but nevertheless it has evidence that supports its effectiveness in treating PTSD.2,8

Imagery Rehearsal (IR) is an approach to treat nightmares. In this protocol, the patient remembers a repetitive, disrupting nightmare then changes some detail of the nightmare to a more pleasant outcome or memory and rehearses the newer version on a regular basis. There may also be a place for these two combined into a treatment protocol to try and relieve symptoms of PTSD – research has been looking into treating insomnia, nightmares, and sleep quality. However, despite having positive response to treatment for the other symptoms of PTSD, sleep disturbances have shown a strong tendency to continue to be a problem.2

Pharmacologic therapy is recommended after a trial of nonpharmacologic approaches such as CBT, EMDR, and IR. Antidepressant medications, anxiolytics and sedative hypnotic agents, antipsychotic agents, and adrenergic inhibitors have been used with varying success in working with patients suffering from PTSD and sleep disturbances. Side effects can include weight gain, new-onset diabetes mellitus, hypertension or hypotension (depending on the classification and drug action), liver damage, and increased risk for sleep apnea.2

PTSD and sleep disturbances are closely intertwined. Research is ongoing to gather a better understanding of the changes in EMG (electromyography) patterns, periodic limb movement disorder (PLMD), obstructive sleep apnea (OSA), insomnia, and nightmares. Randomized-controlled trials are needed to evaluate the efficacy of pharmacotherapy combined with the nonpharmacotherapy approaches and to evaluate the optimum sequencing of these therapeutic approaches.

While relieving some PTSD issues often does not help relieve sleep disturbances, it appears that the reverse of this (treating sleep issues as a first step) can help alleviate PTSD—but this is also not a clearly established strategy. There may be other approaches in psychotherapy that can have a greater impact, which means research into this complex combination of disorders will continue and hopefully build stronger protocols for helping relieve symptoms.

Bill Pruitt, MBA, RRT, CPFT, AE-C, FAARC, is a senior instructor and director of clinical education in the department of Cardiorespiratory Sciences, College of Allied Health Sciences, at the University of South Alabama in Mobile. In addition, he works as a PRN therapist at Springhill Medical Center and volunteers at the Victory Health Partners Pulmonary Clinic in Mobile.