Lung transplantation is reserved for cases in which other techniques have been found inappropriate, but the shortage of available organs limits its usefulness.

mAlthough the first human lung transplant was performed four decades ago, results at that time revealed quite poor outcomes due to the extremely high incidence of organ rejection. The performance of this procedure was essentially put into a holding pattern for approximately 20 years, until the immunosuppressive drug cyclosporine was introduced. This impressive agent was found to be useful in suppressing the rejection commonly experienced by organ-transplant recipients. Transplant centers began reporting success with lung transplantation in the early 1980s. At this time, the number of transplantations that were performed began to increase at a rapid pace.1

As the number of candidates waiting for transplantation increased rapidly, the transplant supply could not even come close to meeting the demand without a corresponding increase in available donors. Both the number of individuals on a waiting list for the procedure and the number of those who died before a donor organ became available increased at a dramatic pace.2 Fewer than 20% of cadaveric donors have lungs considered suitable for harvest.3

The most common indications for lung transplantation cover a variety of conditions such as COPD, idiopathic pulmonary fibrosis, cystic fibrosis, emphysema due to alpha-1 antitrypsin deficiency, primary pulmonary hypertension, and Eisenmenger syndrome.4 The table shows a variety of diagnoses and the frequency with which transplantations of various types are performed.5

It is important to note that lung transplantation is reserved, as a therapeutic option, for cases in which other, less complicated techniques have been considered and found to be inappropriate and/or ineffective. The use of aggressive medical therapy should be undertaken prior to transplantation and may provide the potential recipient with the additional time needed to await a suitable organ donor.

Individuals with advanced, end-stage pulmonary disease, usually in the absence of other organ dysfunction of clinical significance, may be considered for referral to a lung-transplantation center. Candidates will then be screened to determine the severity of their disease, effectiveness of aggressive medical treatment, whether life expectancy is less than 2 to 3 years, their ability to ambulate with the potential for rehabilitation, whether nutritional status is adequate, and whether a satisfactory psychosocial profile and support system are present. The best candidates for single-lung transplantation are generally less than 65 years of age.6

Significant preparation must take place prior to the actual transplantation. The donor organ must be thoroughly inspected and approved by the harvesting team of specialists. While this inspection is taking place, the potential recipient is prepared for the surgical procedure. Many potential recipients proceed to this stage, only to find that problems exist with the donor organ, thus canceling the transplant procedure. If the donor lung is satisfactory, anesthesia of the recipient is induced and the surgery is begun. This takes place while the donor lung is being transported to the transplantation center.7

For single-lung transplantation, a posterolateral thoracotomy incision is made. The lung to be removed is deflated and mobilized while the remaining lung is ventilated. The patient is closely monitored for signs of refractory hypoxemia and hemodynamic instability. Cardiopulmonary bypass equipment is readily available in the event that these complications should occur.

Once the native lung has been dissected, it is extracted and the donor lung is implanted. Tremendous care must be taken to avoid damage to the vagus, phrenic, and recurrent laryngeal nerves. The bronchus, pulmonary artery, and pulmonary veins to left atrium are anastomosed. Once a common source of problems, anastomotic complications are now relatively uncommon.8

Postoperative Management
In the early postoperative period, the use of positive-pressure ventilation for the emphysema patient has occasionally resulted in significant overdistension of the emphysematous lung. This is sometimes successfully managed with the use of independent lung ventilation.9 In most cases, however, routine ventilation and weaning techniques have been used effectively. When lung transplantation is performed on a COPD or emphysema patient, the use of PEEP is avoided. This will help to minimize hyperinflation of the hypercompliant native lung. Management of other types of patients will generally include the use of low-level PEEP.

In order to minimize the chances of allograft rejection, immunosuppression is initiated during the immediate perioperative period and will continue for the rest of the patient’s life. This treatment includes the use of a three-drug combination: cyclosporine or tacrolimus, azathioprine or mycophenolate mofetil, and prednisone. Although this combination of immunosuppressive agents and steroids has led to positive outcomes, it is frequently associated with adverse effects, as well as negative interactions with other prescribed medications. Some of these side effects and interactions can be quite severe, such as nephrotoxicity, leukopenia, neurotoxicity, and hypertension.1

One of the primary causes of morbidity and mortality associated with lung transplantation is infection. These infections can be bacterial in origin, as well as fungal or viral. Fungal infection by Candida or Aspergillus and viral infection by herpes or cytomegalovirus can and does occur. Broad-spectrum antibiotics, such as ceftazidime and vancomycin, are routinely administered. Antifungal drugs, such as fluconazole for Candida and itraconazole for Aspergillus, may also be administered. Inhaled amphotericin B may be administered by nebulizer for Aspergillus.8

In addition to acute and chronic rejection, one of the most common airway-related complications is anastomotic stenosis. This may occur several weeks, months, or even years after the original transplantation. Frequent respiratory tract infections, deteriorating pulmonary function, and focal wheezing may all be symptoms of stenosis. Correction of this problem can usually be accomplished by inserting a stent.12 There have been cases of stent dislodgment causing partial or total obstruction of a major bronchus (see case study).

Given the fact that severe shortages of acceptable donor lungs continue to exist, several issues have been discussed and investigated. One such issue is that of retransplantation. When patients have BOS, the only definitive treatment option is retransplantation. With the current donor supply meeting the needs of only one fourth of those awaiting transplant, those who have already received lung transplants being given second transplants before others who have yet to receive first transplants raises some ethical considerations.13

Case Report
A 48-year-old female patient underwent single-lung transplantation of the right lung approximately 8 years before being admitted to a hospital in Boston in 2003 with a chief complaint of increasing shortness of breath. She had increased oxygenation requirements, with oxygen-saturation levels of 88% while breathing supplemental nasal oxygen at a flow rate of 4 L/min. This patient had developed what was described as a community-acquired pneumonia. Upon examination, the patient was found to have significant wheezing in the right chest. It was noted that a stent had been inserted approximately 3 years earlier due to an anastomosis stricture. After further assessment, the stent was found to have been dislocated to the right lower lobe, causing obstruction of that area. A rigid bronchoscopy was performed in the operating room, but this was unsuccessful in placing the stent back in the appropriate position. After the procedure, the patient required mechanical ventilatory support and pulmonary toilet for the pneumonia, and she continued to have high oxygenation requirements. Balloon expansion of the stricture was attempted unsuccessfully. The patient remained connected to the ventilator. Following an additional 6 days, the patient was brought back to the operating room for another attempt at balloon expansion, this time with success. At this time, the stent was replaced and repositioned. Within 48 hours following the procedure, the patient was removed from the ventilator and was breathing spontaneously. This patient is now doing well on her regimen of pharmaceutical agents and using low-flow oxygen at home. 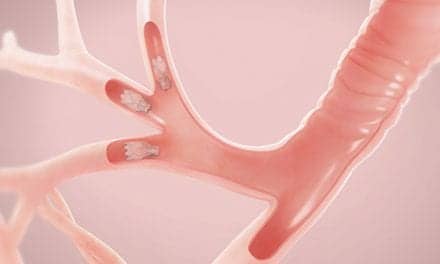 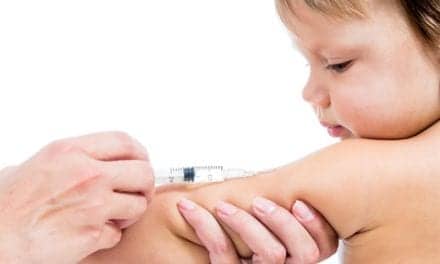