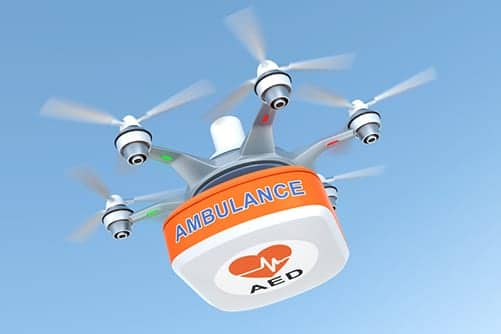 In emergency medical situations, every minute between the incident and EMS response matters. In some circumstances, traditional EMS response via ambulance or helicopter has inherent limitations. These limitations can include travel distance, traffic congestion, terrain obstacles, lack of resources in the affected area, and more. For instance, an ambulance delayed traveling through an urban area may have different limitations from a Medevac helicopter trying to reach an isolated rural town, but they both have a need to arrive as soon as possible. The physical obstacles aren’t identical but the obstacle of time is universal: how to most quickly and effectively deliver emergency care.

Some companies and researchers believe they may have a solution for some emergency medical situations: delivering medical care or supplies via drone. According to the FAA, there are currently 770,000 unmanned aerial vehicles (drones) registered in the United States.[1] Two things that make that number remarkable are: 1) that number is more than double the 320,000 manned aircraft registered in the US; and 2) the FAA launched its UAV registration program in December 2015, which means these nearly 800,000 drones have all been registered in the last two years. Experts estimate as many as 3.5 million UAVs could be in flight in the US by 2021.[1]

While the vast majority of these drones belong to civilian hobbyists, some healthcare and corporate interests are dedicated to seeing UAVs serve a medical purpose, and researchers are exploring their life-saving potential to speed delivery of devices like automatic external defibrillators (AEDs) and rescue medications like asthma inhalers. While use of drones for this purpose is still in its infancy, according to the Mayo Clinic, drones were able to deliver medical supplies to Haiti in response to the 2012 earthquake. In addition, Doctors Without Borders has used drones to transport tuberculosis test samples from a remote village in Papua New Guinea.[2] Perhaps best known are the efforts of consumer shipping companies like Amazon, UPS and DHL, which are testing shipment deliveries via UAVs in the UK and European Union. Meanwhile some aviation and humanitarian aid organizations have begun airdropping medical supplies from drones in countries in Africa, such as Rwanda and Tanzania, places that lack the medical resources or infrastructure to accommodate speedy emergency services. (More on these projects later in the article.) The successes of these international programs are making the case for emergency service drones in the US, and the industry is poised to takeoff.

THE NEED FOR SPEED

Research shows that in cases of cardiac arrest, every minute between collapse and return of spontaneous circulation decreases survival odds by 10%.[3] According to the American Heart Association, in 2016 there were over 350,000 out-of-hospital cardiac arrests.[4] Of these cases, the overall survival rate was a meager 12%, and only 46.1% of the total cases received bystander CPR prior to arrival of EMS personnel.[4]

In cases of asthma or allergy-related anaphylaxis, the quick delivery of life-saving medications like bronchodilators or Epi-Pens (followed by EMS ventilation or oxygen where needed) can be the difference between life and death. Researchers report that oxygen deprivation for as little as three minutes can lead to brain damage and death becomes probable at five.[5] For victims of anaphylactic shock, the majority of those who die do not have epinephrine available at the time of anaphylaxis onset.[6]

EMS response time allegedly had an impact in two separate asthma-related deaths in the Detroit area, according to media reports. One case reportedly took 45 minutes from first 911 call to EMS arrival, at which point the child, who suffered an asthma attack, was pronounced dead. The EMS providers cited a simultaneous emergency in another part of the town that left them unable to respond more quickly, according to a news report from ClickonDetroit.com.[7] In theory, a UAV may have been able to deliver the necessary medications (or AED) to allow resuscitation and spontaneous circulation until paramedics arrived.

While populated urban areas can challenge EMS responders with multiple emergencies or delays due to traffic, rural areas face the challenge of distance and lack of EMS access. According to new research[8] in JAMA Surgery, EMS response times to rural areas was double that of urban areas, and longer than suburban areas as well. A review of 485 EMS agencies and 1.8 million patient encounters found that rural areas (population <2,500) had a median response time of 13 minutes, compared to 6 minutes in suburban (2,500 to 50,000) and urban areas (>50,000). Researchers reported that the 90th-percentile response times ranked: urban (12 min); suburban (14 min); and rural (26 min).[8]

Disaster events, such as hurricanes Harvey and Irma this year, or Katrina in 2005, (in addition to other natural and man-made disasters) present their own unique challenges to EMS response. Flooding, collapsed bridges and roadways, fires or other safety issues can halt EMS ground response and overtax EMS air assets. In fact, an asthmatic child in Houston lost his life after an asthma attack during Hurricane Harvey was not treated quickly enough, in part due to the impact of flood conditions on EMS response.[9]

Clearly, the appeal of UAVs in these scenarios are speed (vs ground traffic), cost (vs manned aircraft), and the fact unmanned drones do not place EMS responders in potential harm’s way.

MAN VS MACHINE: PUTTING DRONES TO THE TEST

In 2015, the state of Virginia tested the first FAA-approved delivery of medical supplies by unmanned aircraft. The test, which was administered by NASA, used a full-size aircraft that was remotely piloted. In 15 minutes, the full-size aircraft delivered 10 lbs of pharmaceuticals, including asthma inhalers, to a location in southwestern Virginia. There, the supplies were divided up and loaded into small, unmanned hexacopter drones, which carried them to the site of a rural health clinic. Researchers and public officials lauded the success of the test and predicted innovation and funding of emergency drones would continue.[10]

A 2017 JAMA study[11] involving simulated out-of-hospital cardiac arrests sought to assess whether drones could reduce response times in “real-life” situations. Reducing time to defibrillation is the most important factor for increasing survival, researchers said. For the study, drone hexacopters carrying an AED (1.7 lbs) were activated by a dispatcher and sent to an address provided by a simulated 911 caller, where the AED could be used by a bystander to administer CPR.

The drones, equipped with GPS and an HD camera, were dispatched for 18 remotely-operated flights with a median flight distance of about two miles. According to the results, in all 18 scenarios, drones arrived in less time than traditional emergency medical services, with a reduction in median response time of 16:39 minutes.[11] Median time from dispatch to arrival of the drone was 5:21 min compared to 22:00 min for EMS. Furthermore, median time from call to drone launch was 3 seconds, compared to a dispatch time of 3:00 min for EMS. While researchers noted some limitations of the study, such as the small number of flights over short distances in good weather, they concluded that the significant reduction in response time to be “clinically important.”[11]

STARTUPS ARE IN THE AIR

While formal research is likely to fuel more EMS drone initiatives, the medical drone industry has already begun ramping up its innovation and testing. US-based company Zipline began drone deliveries of medicine and blood in Rwanda in 2015. Since then, the company has completed approximately 1,400 deliveries in Rwanda, including emergency drops, according to an article by The Verge.[12] The company uses fixed-wing, electric drones to airdrop up to 3 lbs of supplies, which Rwandan hospitals can order via text and receive within 30-60 min, The Verge reported. After logging over 60,000 flight hours in Rwanda, Zipline will expand into Tanzania and establish “the world’s largest national drone delivery service,” according to the article. Four Zipline distribution centers will man 30 drones each, fly as many as 2,000 daily deliveries, and have the potential to reach 55 million Tanzanians.[12] Based on the success of these initiatives, Zipline will begin testing in the US as well. The company plans to offer its drone delivery program in rural and remote communities in Maryland, Nevada, and Washington, including some Native American reservations, according to the article.[12]

Contemporaries are also investing in the industry. US-based Matternet has partnered with UNICEF to transport HIV samples in Malawi; San Francisco startup Otherlab is developing a “disposable” cardboard drone called the Apsara; and tech giant Google is developing drones to deliver telemedicine to disaster zones. The industry is growing quickly and so is its profile. In fact, President Donald Trump recently convened a gathering of drone companies at the White House to talk technology, innovation, and medical applications of UAVs.[13]

PROGRESS, BUT NOT SO FAST

While the health and humanitarian benefits of unmanned drone deliveries are clear, there are as many detractors of UAV technology as there are proponents. Among the concerns over what is a mostly unregulated industry are privacy, safety, and the exponential growth of civilian drone use.

While the concerns are focused primarily on hobbyists, according to an article[14] by The Verge, many for-profit commercial drone pilots are being authorized by the FAA to pursue emergency service missions in support of EMS personnel. As the article reports, EMS personnel are not in the habit of requesting assistance from civilians. In fact, the majority of media reports on the subject of drones are cautionary or negative. Airports frequently report civilian drones near restricted airspace, as do fire departments which can divert air support for wildfires if a civilian drone is detected in the area. EMS personnel have themselves taken to the Internet and social media to implore drone pilots to avoid flying in restricted or emergency airspace.[15] While the FAA has imposed some loose regulations on drones, a federal appeals court in Washington DC recently ruled that the FAA has no authority to regulate drone use by hobbyists.[16] As a result, hobbyists no longer have to register their drones in the FAA’s national database, according to the article by Fortune.

Experts predict the industry will continue to debate the benefits and concerns of drone aviation growth and work towards safe and common sense regulations both locally and nationally. In the end, though, drone advocates like Zipline CEO Keller Rinaudo believe the emergency medical applications of UAVs will win over any skeptics. “People think that this is impossible and completely wild,” Rinaudo told The Verge.[12] “And the reality is that it’s completely possible and in fact, it’s vastly simpler.” RT 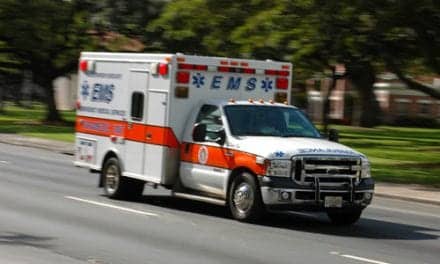 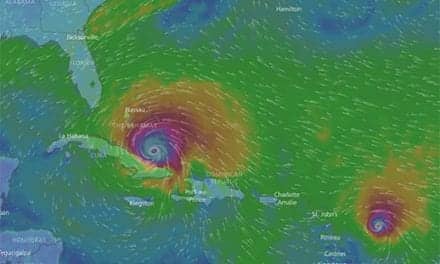