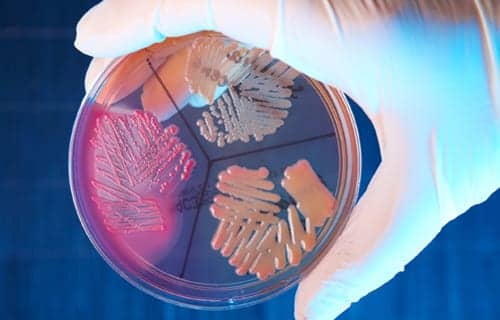 Every year 160 million prescriptions for antibiotics are written in the United States, nearly 30 prescriptions per 100 persons. Probably half are inappropriate.

Resistance to antimicrobial agents has been recognized since the dawn of the antimicrobial chemotherapeutic era. For example, when penicillin was first introduced, it was known to be highly active against streptococci and staphylococci, while organisms such as Escherichia coli were resistant. Soon after, the first examples of penicillinase-producing staphylococci were reported. Today, most staphylococci recovered from human infections are penicillin resistant. While the development of some degree of antibiotic resistance may be inevitable, indiscriminate or improper use of antibiotics and the ease with which resistant organisms are spread are important in accelerating its development.

The current crisis in antimicrobial resistance, illustrated by such organisms as multidrug-resistant Mycobacterium tuberculosis, methicillin-resistant Staphylococcus aureus (MRSA), vancomycin-intermediate S. aureus (VISA), vancomycin-resistant enterococci (VRE), and penicillin-resistant pneumococci, is confounded by the paucity of new antibiotics in development. Only two major antimicrobial agents have been introduced in the past few years. In late 1999, a new medication active against vancomycin-resistant bacteria was developed. Two streptogramins, quinupristin and dalfopristin, are administered together. These drugs act synergistically by binding to the bacterial ribosome and inhibiting distinctive steps in protein synthesis.1,2 In 2000, linezolid was introduced, representing a new class of antibacterials: the oxazolidinones. This drug also interferes with protein synthesis and is effective against beta-lactam–resistant and vancomycin-resistant bacteria.3,4

Antibiotic pressure is the crude relationship between the extent of drug use and the selection of resistant strains. Each year, in the United States, 160 million prescriptions are written for antibiotics and 22.7 million kg of antibiotics are prescribed (approximately 50% for human use and 50% for use in animals, agriculture, and aquaculture).5 This enormous level of antibiotic use has great potential for selecting or enhancing the growth of resistant strains. Probably half of all such uses are inappropriate, as represented by the needless treatment of viral upper-respiratory diseases.5,6

The problem of antibiotic resistance is global. An organism’s expression of a novel gene coding for drug resistance in remote communities has implications for the developed world. Once a resistant organism is introduced into a population, it is rapidly disseminated. Physicians worldwide have been encouraged to join public health authorities, the infection-control community, and the pharmaceutical industry to curb the inappropriate use of antibiotics and promote responsible prescribing.5

Bacterial resistance to antibiotics may develop as a result of a chance mutation or by exchange of DNA with another bacterium.6,7 It is known that DNA transfer can occur between unrelated species. Plasmids provide the mechanism for the exchange of DNA. Usually, plasmid exchange stays within a species, but this is not always the case. Genes that code for antibiotic resistance can be contained within these plasmids and transferred between bacteria.

Some bacteria can synthesize enzymes that destroy the antibacterial agent or modify the agent to alter its entry or receptor binding. Staphylococci, Haemophilus influenzae, and Moraxella catarrhalis, for example, are notorious producers of beta-lactamases, enzymes that attach to a chemical side chain on the beta-lactam nucleus of certain antibiotics (for example, penicillins and some cephalosporins), thereby inactivating these antibiotics.

Some bacteria develop antibiotic resistance by altering their cell-wall precursor targets, thereby preventing the antibiotic from disrupting the architecture of the cell wall. For example, Enterococcus faecalis and Enterococcus faecium have increasingly exhibited resistance to vancomycin, a glycopeptide molecule that must bind to an amino acid in the bacterial cell wall. By doing so, it blocks synthesis of peptidoglycan, resulting in weakening of the cell wall and, ultimately, in cell lysis. By altering their cell-wall precursor targets, E. faecalis and E. faecium can prevent vancomycin’s action.

Another mechanism of resistance is modification of the target enzyme so that it remains functional and insensitive to the antibacterial agent; beta-lactam antibiotics destroy bacteria by binding and inhibiting penicillin-binding proteins (PBPs), enzymes located in the bacterial cytoplasm that are important in cell-wall biosynthesis. Alterations of these enzymes can lead to beta-lactam antibiotic resistance. For example, some resistant strains of Streptococcus pneumoniae have shown changes in their PBPs. In addition, alteration of PBPs has been implicated as a mechanism causing MRSA. Infections caused by this organism are often difficult to treat because MRSA is resistant not only to methicillin, but to virtually all penicillins and many other antibiotics. It is also important to note that some bacteria, most notably E. coli, S. aureus, and Pseudomonas aeruginosa, have developed resistance to some quinolone antibiotics by producing alterations of DNA gyrase (a bacterial enzyme).

Some bacteria develop resistance by overproducing target enzymes. Target enzymes remain functional but become insensitive to the antibacterial agent (in a way similar to the effect of target enzymes that are altered).

Increased elimination of the drug can occur through promotion of antibiotic efflux, the major mechanism through which resistance to tetracycline is found in enteric gram-negative organisms. Antibiotic efflux is an energy-dependent process that is related to the generation of an inner membrane protein by the resistant bacteria. Alterations that result in the increased expression of these pumps can increase the overall capacity of an organism to eliminate a drug, thus enabling the organism to resist higher concentrations of that drug. Active antibiotic efflux has also been demonstrated by some bacteria for macrolide antibiotics such as erythromycin.

Respiratory-tract infections (RTIs) are a serious problem worldwide. They are very prevalent and continue to be a leading cause of death.8,9 Although numerous microorganisms can produce RTIs, the most common bacterial pathogens are S. pneumoniae, H. influenzae, and M. catarrhalis, as well as M. tuberculosis.

Currently, in many parts of the world, antibiotic resistance to H. influenzae and M. catarrhalis is of increasing concern. The main mechanism of resistance is beta-lactamase production, which makes these strains resistant to penicillin, ampicillin, and amoxicillin. The emergence of other types of antibiotic resistance, although there have been some exceptions, has been relatively low. An ongoing, international multicenter study13 that included 1,843 strains of H. influenzae showed that the incidence of beta-lactamase production was 28.4% in the United States and 15.4% in Europe.

In the late 1980s, resistance of M. tuberculosis to antimycobacterial agents emerged as a serious challenge to tuberculosis control worldwide. Multidrug-resistant tuberculosis is commonly conceived of as resistance to two or more first-line antituberculous drugs (or resistance to at least isoniazid [INH] and rifampin).14 Both primary and acquired drug resistance may occur. The latter can be exacerbated by inappropriate prescription, poor patient compliance, or an insufficient number of active drugs in the therapeutic regimen.

Gram-positive infections have become an increasing health problem in recent years, particularly in the nosocomial setting. Data from the National Nosocomial Infection Surveillance (NNIS) program and from prevalence surveys indicate that enterococci and staphylococci account for more than 50% of isolates from infected blood, and an additional 4% are streptococci.15,16 In a national surveillance study17 conducted at 43 medical centers throughout the United States, 60% of isolates from blood infections were gram-positive species.

VRE, a highly resistant strain of enterococcus, was first reported18-20 in Europe in 1988 and is becoming an increasing concern worldwide. VRE is sometimes called VREF, which can stand for vancomycin-resistant E. faecalis or E. faecium. Vancomycin is an extremely potent intravenous antibiotic. When bacteria become resistant to vancomycin, limited treatment options exist. VRE are likely to be resistant to antibiotics other than vancomycin, particularly penicillins. VRE is a well-recognized cause of intra-abdominal infections, endocarditis, urinary-tract infections, wound infections, and bacterial sepsis.21

Enterococci are well equipped with a vast array of antibiotic-resistance traits. Some of these resistances are naturally occurring traits displayed by most, if not all, of these organisms. Examples include their resistance to cephalosporins, aztreonam, penicillinase-resistant penicillins such as oxacillin, and low levels of aminoglycosides and clindamycin.

Vancomycin use in US hospitals has increased dramatically in the past 10 to 15 years because of a variety of factors, including increases in the incidence of MRSA, prosthetic device–related infections, Clostridium difficile colitis, and inappropriate use of the drug.22,23 The use of vancomycin and other antimicrobial drugs is an important risk factor for human VRE infection.

MRSA was first described in 1961,24 shortly after the introduction of penicillinase-resistant beta-lactam antibiotics into clinical practice. Since then, hospitals worldwide have reported varying proportions of MRSA among S. aureus isolates. Over time, several MRSA isolates have acquired resistance to other antibiotics; thus, MRSA has become a real clinical and therapeutic problem.

Today, MRSA is a major nosocomial pathogen found in an increasing number of hospitals worldwide. According to data from the NNIS, the percentage of MRSA among all S. aureus isolates rose from 2% in 1975 to 29% in 1991.25,26 More recently, the Nottingham S. aureus population study identified an MRSA prevalence of 56% among S. aureus isolates from hospitalized patients.27,28

S. aureus is one of the most common causes of both hospital-acquired and community-acquired infections worldwide, and the antimicrobial agent vancomycin has been used to treat many S. aureus infections, particularly those caused by MRSA. Although S. aureus remains susceptible to vancomycin, the emergence of strains with only intermediate susceptibility to the antibiotic is raising fears that the emergence of a fully resistant strain is not far off.

Organisms are deemed susceptible to vancomycin if the minimum inhibitory concentration is 4 µg/mL or less, intermediately susceptible at 8 to 16 µg/mL, and resistant at 32 µg/mL or more.29

The first report of an infection with a strain of S. aureus that had only intermediate susceptibility to vancomycin came from Japan in June 1996.30 This report raised concern among infectious disease experts and led the Centers for Disease Control and Prevention (CDC) to issue interim recommendations on how to control VISA infections.31 The growing number of US reports documenting VISA infections is bringing the issue closer to home. 32-36

The mechanism through which staphylococci become resistant to vancomycin is not clearly understood. Investigators have isolated a vancomycin-resistant S. aureus mutant in vitro that appears to have structural cell-wall alterations that increase its ability to bind vancomycin.35 The researchers theorized that this alteration may prevent vancomycin from reaching crucial sites of cell-wall synthesis, thus impeding its bactericidal actions. Most cases of VISA infection have one feature in common: the organism was initially sensitive to the antibiotic, but a moderately resistant strain was subsequently isolated after prolonged vancomycin use.

Both the CDC31 and the Society for Healthcare Epidemiology of America (SHEA)37 recommend that all clinical isolates of S. aureus be tested for susceptibility to vancomycin. Laboratory personnel should notify the laboratory director if vancomycin-resistant S. aureus is discovered. Many isolates of S. aureus presumed to have been vancomycin-resistant have been found to be mixed with other organisms in culture; therefore, vancomycin resistance should be confirmed by restreaking the colony to certify that the culture is pure. The hospital epidemiology program should be notified immediately so that it can institute appropriate isolation procedures. The public health department, other hospitals in the vicinity, and the CDC should also be notified.

Drug-resistant respiratory and nonrespiratory pathogens are an alarming clinical problem and a growing public-health hazard. If a drug-resistant strain is isolated, the physician and staff should follow the CDC and SHEA guidelines, which recommend placing the patient in isolation, initiating good infection-control procedures and obtaining baseline cultures from known contacts. New and emerging antibiotics may help us win the battle against multidrug-resistant microorganisms, but in order to win the war, we have to minimize the indiscriminate use of antibiotics and ensure prescription compliance in an attempt to slow or halt cell transformations that promote drug resistance.

Flu Vaccination Likely to be More Effective in Future